Jason Wootton must have one of the best jobs in the country. The skipper of the charter boat “Te Ariki Nui”, he lives in Opua in the beautiful Bay of Islands. An invitation to spend a day out fishing with him was impossible to resist, especially as the forecast for Auckland was for several days of heavy rain. The drive north saw the weather steadily clear, until we reached the clear blue skies that Russell is well known for.

Our introduction to Te Ariki Nui (which loosely translates to “Big Chief”) on the Russell wharf early in the morning was suitably theatrical, with the big Salthouse 52 dramatically emerging from the mist. There could be no doubt that this was a serious game fishing boat, with a ‘Tuna Tower’ stretching above the fly bridge and outriggers scraping the sky.

Built in 1986 with a Kauri hull, Te Ariki Nui has been a feature of the Bay of Islands Game fishing charter scene since 1995. Originally owned by the legendary Bill Hall, the boat featured strongly in his book “Marlin Fishing”, published in 2002. Te Ariki Nui has remained a major force on the local charter scene despite a change in ownership and the recent decline in the number of boats still in the trade.

The boat is kitted out for extended trips. In survey for 20 people in coastal waters, she has berths for 6 passengers in three cabins. Regular trips are made to the Three Kings between January and June. Two toilets, three showers, a full galley including oven, hob, sink, no less than four fridges, and an entertainment system that includes a DVD player and large LCD TV make the trip comfortable.

The main saloon has large comfortable couches that also double as comfortable beds, a fact attested to by my son during our day trip. The fly bridge has seating for a dozen people and when trolling this is the place to be. Clears fully enclose the fly bridge, but large roll-up windows enable this to be opened up when conditions are pleasant enough.

An incredible array of electronics is fitted to the boat. In addition to the expected GPS (two), chart plotter (two), VHF (two) and sounder (three, including a particularly fine Furono unit with enough power to get down over 1000m) are a weather fax, phone, SSB radio and 75-mile radar. There are three fully-equipped helm stations, in the main saloon, fly bridge and the cockpit, each connected via electronic controls to the appropriate hard-working bits.

Main power is by a pair of 3208 caterpillar diesels, and she carries 4500 litres of fuel. This gives her a cruising range of over 1500 miles, with a top speed of 20 knots. A 2500W inverter provides mains power when needed, while a 900 litre freshwater tank provides drinking and washing facilities for those onboard.

The boat is also superbly equipped for fishing. A game chair takes pride of place in the spacious cockpit, and rod holders are spaced all around the padded gunwale. The outriggers mounted on each side swing out when trolling, enabling a good spread of lures to be pulled. Live bait tanks and a bait freezer are hidden under deck hatches.

The gear on board is top quality, in keeping with the rest of the boat. Main marlin gear is Shimaro Tiagra 80W reels, spooled with 37kg mono. These are combined with Shimano Tiagra 80TS rods, and a number of stand-up game harnesses are available in addition to the chair.

Although we were right on the leading edge of the game fishing season, Jason reported that a local boat had reported a touch of a marlin the previous day. The first yellowfin tuna of the season had been caught a fortnight before, and water temperatures were now consistently reaching the right range. So it was with high expectations that we headed out, although we knew that our chances were relatively slim.

First stop was for some live bait, and a kawahai was soon swimming in the bait tank. The livies proved a bit slow, so rather than waste more time we headed straight out, while dragging a small lure for skipjack tuna (bonito) behind the main spread.  The first skippie came on board quite quickly, and we soon had a few swimming around the tank. 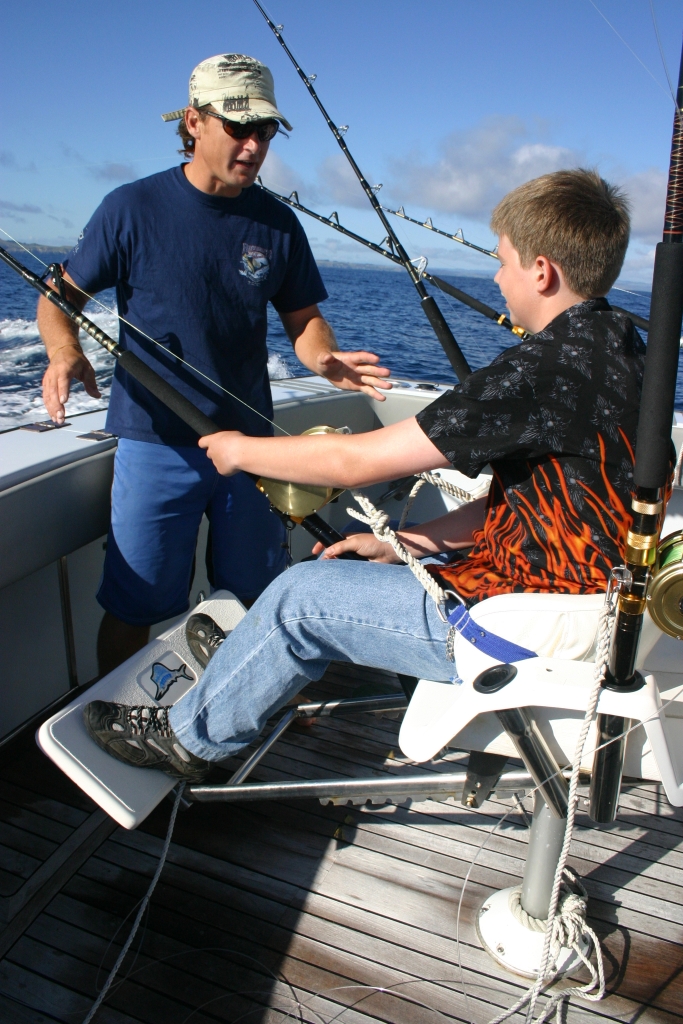 We trolled up the coast in a northerly direction, heading towards our plan ‘B’ destination, a hapuka spot. Trolling a spread of flat and bullet-head lures, we motored at a leisurely 9 knots. The water temperature was 19 degrees, and all the signs were there for the fish.

Unfortunately the game     fishing gods were not on our side. We had a few diversions when a pod of dolphins played around the boat, and an accumulation of birds received a second look. Apart from that it was pleasant but uneventful until we reached the hapuka ground around 11:00.

Now the work started. First Jason spent a good while motoring around finding the fish. With almost 300m of water to drop through (and, more importantly, to wind back up through) we wanted to make sure there were fish down there. Adam the deckie prepared the gear, sturdy braid outfits with Hapuka rigs and serious lumps of lead on the end.

For safety sake (the rod’s safety, that is!) I fitted a harness, while my son Richard, the other angler, used a game rod that remained firmly in the gunwale. When Jason was happy we were at spot X, we dropped the rigs while he gently manipulated the engines to keep us in one place.

The first drop was unsuccessful, although our baits were cleaned off. After a seemingly interminable wind back up we changed position slightly and dropped again. This time we had more luck, with Richard bringing in a large gemfish that tipped the scales at 22 pounds.

Once his arms had recovered from the strain of winding the fish all that way, then having to hold the fish up for several minutes while I took pictures, we dropped another bait. Once again it was Richard who produced the goods, bringing a 12 pound Hapuka to the surface while I just brought empty hooks back up.

A few more drops produced no results, and the developing swell had in the meantime encouraged Richard to feed the fish in the worst possible way. Since we had enough fish for a feed on board we decided to try our luck again while trolling back home. Adam set out the game gear again and we headed back towards Cape Brett, on a wider track to out outgoing ride.

Lunch was on the agenda next, and a wonderful quiche and salad was provided which would have done any Parnell cafe proud. We were assured this was the normal fare for their trips, and it was followed by delicious chocolate brownies. Our choice of drinks were provided throughout the day, and once his stomach settled to the more regular motion of the boat under way Richard also tucked into a hearty and healthy lunch.

The trip back again was unsuccessful, but we had a few moments when a fin was spotted in the spread of lures (regrettably just a sunfish which happened to be swimming the wrong way). Later on another fin proved to be a small shark, and dolphins were again seen closer to shore.

So, no game fish this time, despite our high hopes. It really was too early in the season, and Jason said that it is only in January (around the time this issue hits the shelves) that the fishing will really start to fire. The boat specialises in five-day trips to the Three Kings, and typically takes a party of up to five anglers at a time.

Although Jason runs a number of one-day and two-day trips through the season (which runs from January to early June) he suggests that if an angler wants to be sure of a marlin they should aim for a longer outing. At $2200 plus GST per day, a 5-day trip is quite accessible to the serious angler who can get a group together.

We had a fantastic day and I can highly recommend this superbly set-up and run charter operation. Give Jason Wootton a call on his mobile 0274-471-550, or email him at billfishnz@yahoo.com

Why start a blog? A good question which deserves and answer, although the best I could think of is probably “because it is about time”.

I have been a freelance boating writer for more than 10 years now, and have upwards of 300 boating reviews, technology articles, boating tips and tricks, fishing articles and scuba articles published. Because of the nature of magazine publishing these are often transitory, and a few month after the magazine has been printed the article is gone forever.

While some of those articles are probably best consigned to the wastebins of the world, a percentage of them are useful and worth referring back to. Since I have the original content I can easily post these in a way that is interesting and able to be cross-referenced. In addition I can add content that is not necessarily magazine-material, but rather small snippets of useful knowledge that others may benefit from.

So, this still does not answer the “why”. And the reason for that is simple: Traditional magazines are losing their market. The internet is eating their lunch, and the traditional print media has, on the whole, no idea how to respond. So my blog is a response to this, to get the content out there in a new way and show them how to move from static pages to dynamic, hyperlinked content with videos and active media as well as pictures and words

So watch this space….